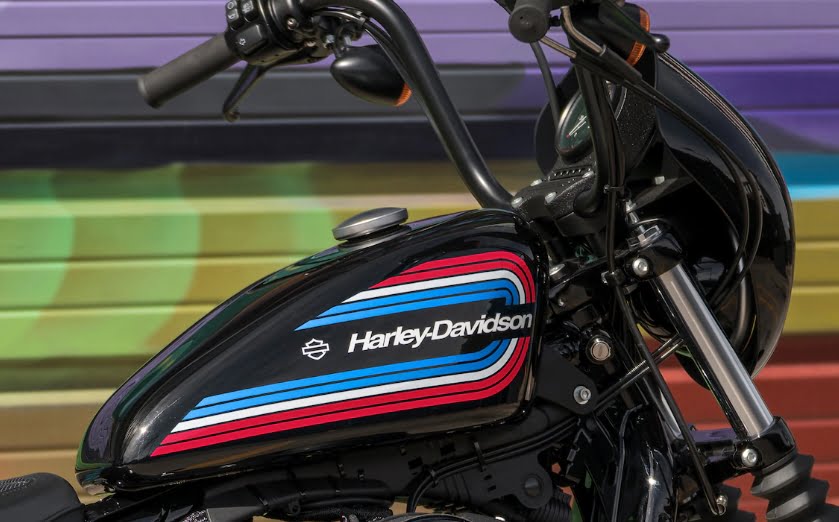 Motorcycles are different things for different people. Cruises remain a mystery to some motorcyclists, even for veteran drivers, they can't understand the appeal of something other than newer handling, faster and better. Fortunately, Harley-Davidson continues to build motorcycles that are part of our lives, instead of just a highly efficient adrenaline extractor, not that there's anything wrong with that. This brings us to the Harley-Davidson Iron 1200 2020, back for the third year in production.

Just look at the Iron 1200 It cheers me up, appealing to my sense of motorcycle riding on a wide variety of levels.

The classic push rod actuated two valve engine is cozy simplicity. Air cooling keeps things real, while the modern touch EFI system is tastefully hidden by a round air filter holder. How many horsepower does the 73 ci V-twin?. The critical numbers are 73 foot-pounds of torque at 3500 rpm. From idle,  all the linear power it takes to fight in traffic, walk the boulevards or face the urban canyons. Rubber-mounted Evolution motor sounds good and feels right on the chassis.

Above the engine is a fuel tank that brings back the decade of 1970. Definitely, the style inspired by the AMF era of the years 70 has been controversial. For some, remember dark days for the Motor Company, and i can understand that. We were surprised by the graphics when they were released three years ago, but I can say I'm glad that Harley-Davidson has stuck to designer pistols with the Iron 1200 2020.

They have almost passed 40 years since AMF retired, So I think we can let the past be the past. Ah, and the tank has a capacity of 3.3 gallons usable thanks to a claim of 48 mpg, so you won't get to the gas station every few minutes like you would a real peanut tank.

Other perfect vintage styling touches include hairpin leggings, bikini fairing, swinging fenders, Minimalist speedometer and side mounting plate. I'd like to see wheels with wire spokes to tie everything together.

Ergonomics on the Harley-Davidson Iron 1200 2020 recalls a Schwinn Stingray with mid-position foot controls, Mini-Apes and a single seat. The seat relationship / peg is better suited to smaller motorcyclists, although the raised handlebar provides necessary knee room for taller riders. Although my crotch of 32 inches could have used more space, did not stop me from enjoying walks in the city and inland.

Seat has poor padding, since Harley-Davidson wants to keep the seat height as low as possible.

Michelin Scorcher tires 31 they have all the grip you need, and are not taxed by the smooth power or the 28 degrees of left lean angle, and one degree less to the right.

Twin shock absorbers allow us 1.6 inch wheel travel, and the fork allows 3.6 inches of travel, although they get a hint of help from high-profile Michelins. On smooth roads, the suspension is pretty good, but things get tough quickly when the pavement has maintenance issues. The short trip is also eaten quickly in the city in sauces, potholes and various other traps., Harley-Davidson achieves decent travel from short travel dampers thanks to emulsion technology.

Braking on the Harley-Davidson Iron 1200 2020 is moderately adequate. Gets a single rotor of 300 mm at the front with a double piston caliper and a disc 260 mm at the back. While you can use the front brake exclusively, that big rear disc and the rear tire of 150 mm will do their parts in slowing down, together with a significant contribution from engine compression braking. ABS is too expensive an option $ 795, and arguably it's not absolutely essential if you never drive in the rain.

The winning nature of the Iron 1200 it's double. The most important, as a motorcycle enthusiast, it's a nice trip. Smooth, roomy power is always there, and it can be an exciting walk through the city with just a twist of the wrist. Low-rise chassis responds well and natural ergonomics don't wear you down.

Engine enthusiast, especially for motorcycles in Costa Rica and the adrenaline their use.

This site uses Akismet to reduce spam. Learn how your comment data is processed.

We have a team of professionals to advise chivisimas willing to grow your business. Contact

We are the nationally recognized magazine, positioning ourselves as the magazine motorcycle and ATV greater impact on production information, as our vision.